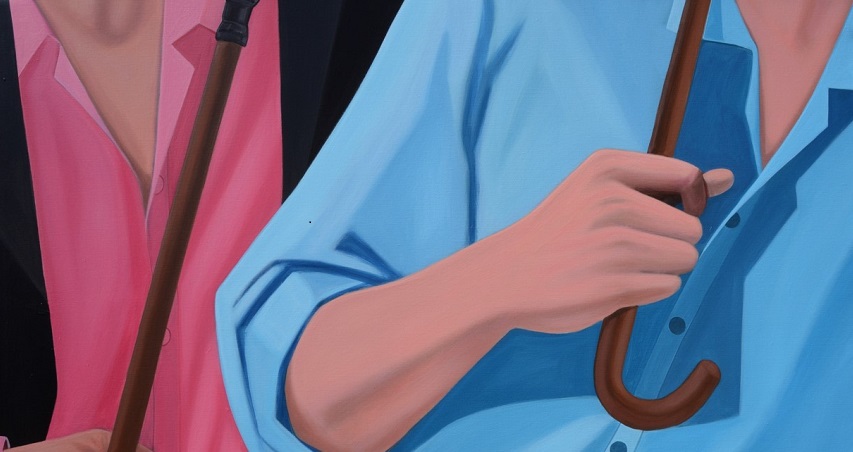 This is an artist known for his use of the human figure, regularly depicted in different poses and exquisitely painted, often with identifying attributes, but never revealing the face. In his Artist’s Statement for a Los Angeles exhibition recently, Estacio states: “The images of my paintings embody general ideas through fragments and details that allude symbolically to a chain of actions that are at a speculative and interpretive level. I always find it more accurate to say that in my paintings absolutely nothing happens, except what an observer is able to infer. The ambiguity tries to combine purely formal notions with the conceptual associations that they generate. The use of the human figure removed from any individual reference helps me focus on personality archetypes. My compositions include costumes and color as essential components creating a cinematic quality.” (http://www.loislambertgallery.com/data/web/1-Darwin_Estacio_Martinez_Artist_Statement.pdf )

In 2007 Estacio graduated with a Bachelor of Arts from Havana’s prestigious Instituto Superior de Arte (ISA). This first degree in Fine Arts, specialising in portraiture painting, was followed by a Masters degree in Microsociology from the same institution in 2011. Today he teaches a Research Workshop on Artistic Processes at ISA as well as a Painting Workshop at the San Alejandro Academy of Fine Arts. Estacio is an active member of the Hermanos Saíz Association of artists.

Estacio has exhibited in solo and group shows in Cuba – in Havana and beyond. He participated in symposium panels at Havana’s internationally acclaimed Biennial in both its 10th and 11th editions and his work has been displayed in collateral exhibitions at successive Biennials. His work appeared in the important Post-It exhibition of current generation artists in Havana in 2013. Since 2010 Estacio has been exhibiting on the international art scene in group shows in countries such as Germany, the Netherlands, Spain and the US. Presente! is the first appearance of his painting in the UK.