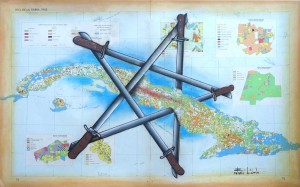 Pérez Alonso is a self-taught artist with a productive career, who has won prestigious awards for his work.  He specializes in charcoal drawings that reveal his distinctive approach to Cuban identity.  Instead of the more traditional use of bright colours, he applies different materials to charcoal drawing and often frames them with rustic mouldings of decomposing pine wood.

This artist has participated in up to 30 group exhibitions including the Havana Biennial (2006); Yo sé de un pintor gigante, to mark the 150th anniversary of the birth of José Martí; Four Cuban Artists, in Costa Rica, alongside three renowned Cuban artists: José Manuel Fors, Ibrahim Miranda y Alexis Leyva (Kcho); and at the Instituto Cervantes in London.  Pérez Alonso has had over 20 solo exhibitions including Endémico at the National Council for Visual Arts in Cuba.

His works are in private collections including in Austria, Canada, Chile, China, Columbia, Greece,  Mexico, Spain, USA and UK. He is a recipient of numerous awards including: Grand Prix in El Salón de la Ciudad from the Centro Provincial de Artes Plásticas y Diseño, Havana; Finalist in the Salon of Digital Art (2002, 2004), Distinction in Gitana Tropical, Havana (2009).