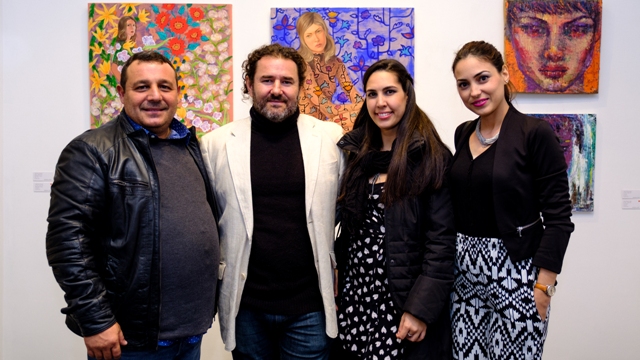 In London in October 2016 Cuban art curator Chrislie Perez, Cuban artists Adislen Reyes, Luis Camejo and Mario Gonzalez, were joined by Pedro Perez Sarduy, Cuban writer based in the UK, and Teresita Vicente the Cuban ambassador in the UK in conversation.

How important is culture in Cuba?

Teresita Vicente: Culture is at the centre every single day – from morning when we wake up singing. It started with the Literacy Campaign in 1960 and since then the democraticisation of art has been at the centre of revolutionary policy.

Pedro Perez Sarduy: I’m from Santa Clara and when I was young I won a short story competition and in 1962 I went to Havana when the National School of Arts (ENA) was being created.  I suddenly found myself on the 6th floor of the Havana Libre hotel training as a literary advisor so that I could show people in the countryside how they could make their story into a story.

Chrislie Perez: Art and culture have continued to grow – not just through government policy but also via the work of artists – talking to young people in schools and colleges, casas de cultura, community projects in hurricane areas even. I mean its not something that only happens in school – they also go out to communities.

Luis Camejo: Artists can represent Cuban society inside and outside the country.

Adislen Reyes: The revolution has given us education – an ability to think, critique and have pride in our culture.

What opportunities are open today to a child with talent – in music, dance, visual arts?

Mario Gonzalez: There are a lot of arts in schools at all levels throughout the country – from primary level to post graduate – such as the ISA. In fact I understand there are currently 25,000 visual artists in Cuba today!

Adislen Reyes: I teach at intermediate level (age 15-19). If one school is doing better than another – we look to improve resources to improve the level in that school. Arts are not a privilege – they are for everybody. There are tests for talent to get into the specialist art schools. Assessor teachers go out to the provinces to ensure equal access to art schools.

How does the blockade impact on culture?

MG: It is very difficult for artists to find materials. The Art Foundation (part of the Ministry of Culture) in Cuba has to buy materials from China – which would be cheaper if they could buy closer to home.

AR: In schools it is also difficult to find materials but sometimes it makes us more resourceful – to make more with less.

PPS: For a writer it is totally different. I don’t need so much equipment – tools like musical instruments.

LC: I think it does affect creativity but also encourages creativity.

CP:As a gallerist it is very difficult to sell art work as US credit cards can’t be used due to the blockade for example.

In relation to arts and culture are inequalities developing?

PPS: Well, artists of all types need to be properly paid. I came from a working class background, I won a short story competition and I had the opportunity to become a writer.  Cubans like art and enjoying art before the revolution was only for the upper class.

MG: All artists have the right to sell their work – they can sell via galleries and the gallery takes a percentage and the artist pays taxes. If a work is sold in the US, we receive money and we pay our taxes. Art can be sold in workshops and we get a percentage. 80% of my buyers are in the US and the rest around the world.

MG: Artists are not subject to any censorship. I have many different sources of income and sell work all over the world including the US – also, private clients do not affect the way I work nor the content.

TV: Artists are educated by the state but can express what they want.

PPS: If you dig into Cuban history there have been forms of censorship. For example a long time ago I wrote a poem called ‘Like a rolling stone’ and I had some problems – but censorship didn’t really work for the Cubans. As Caribbeans it was difficult for restrictions to be imposed.

How did you get the status as an artist?

PPS:  When I won the Casa de las Americas award in 1966 I was able to join UNEAC – it operates like a type of guild copied from Eastern Europe.

LC: UNEAC is the Union of Cuban artists and writers –it supports its members. To join you have to show you have achieved a certain level as an artist.

AR: Usually you graduate from artschool then register with a group or organisation then you have status as an artist. But also people who haven’t gone to artschool can become an artist – like Mario here.

MG: I gained special status as an artist when I got together 50 artists and gave them all fridges which were being thrown away and got them to make art with them. Fridges were really important at the time as there was the energy revolution to encourage people to use less electricity. “Monsters that devour energy” was the title of the work and it toured the world.

What is the most striking difference in art education between Cuba and here?

MG: The main difference is money – our university education is free.

PPS: On TV you can see a South African student fighting for their education. In Latin America, in Chile they have to pay. We are privileged – and the new generation must appreciate that.

CP: The training here is shorter but otherwise it looks similar. We also saw the regeneration of a community through arts in Hull this week – which we also do in Cuba.

Watch a short documentary which also includes interviews with Chrislie, Luis and Adislen while they were in London for the exhibition in October 2016 here